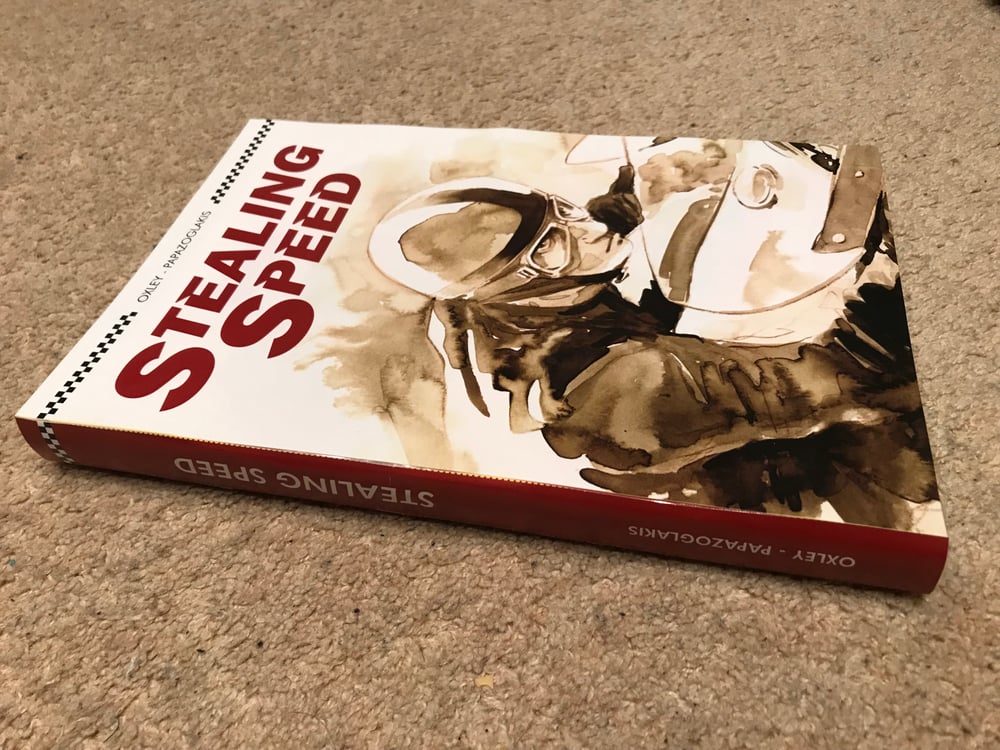 The long-awaited graphic novel of Stealing Speed: hardback, 192 pages. Stunning artwork by Christian Papazoglakis makes this a unique book - there's never been a graphic novel covering motorcycle racing quite like this. The story follows the original true story.

For those who don't know this amazing tale... This is the amazing true story of how one of Japan’s biggest motorcycle manufacturers stole a Nazi secret-weapon engineer’s secrets from behind the Iron Curtain to win the motorcycle power race and conquer the world

In 1961, with the Cold War at its height and the world on the brink of Armageddon, the East and West were fighting a very different battle on the racetracks of Europe. Powered by two-stroke engine technology developed by former Nazi engineer Walter Kaaden, tiny East German motorcycle factory MZ took on the might of the emerging Japanese motorcycle industry with the most powerful bikes in the world.

This is the story of MZ rider Ernst Degner who defected to the West at the height of his battle for the 1961 world championship and sold MZ’s winning two-stroke engine secrets to Suzuki, while his wife and children were drugged and smuggled through the newly built Berlin Wall.

The following year Suzuki and Degner made history by winning the two-stroke’s first world championship and Japan was on its way to conquering the world of motorcycling. Branded a traitor by East Germany’s communist authorities, Degner’s life took a downward spiral, he suffered horrific injuries in a fiery racing accident and died in mysterious circumstances, addicted to morphine.

Hardback 170mm x 250mm
ALL BOOKS ARE SIGNED BY MAT